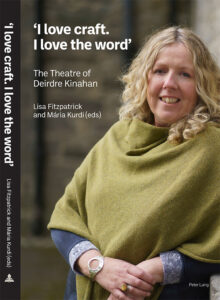 Over the last twenty years, Deirdre Kinahan has emerged as a significant and original female voice in Irish theatre, with her plays produced in Ireland, the UK, the USA, and across mainland Europe. Her work explores issues of personal and communal identity, bringing forward the difficulties that arise for individuals when accepted narratives of identity diverge from contemporary experience. In this collection of ten original essays, and an interview with the playwright, the authors address the ways in which Kinahan’s plays interrogate and seek to renegotiate value systems of family, class, ethnicity, age, and gender in the 21st century neoliberal, secular state, with an emphasis on experimental forms and the renewal of the genre of the family play. Theoretical frameworks rely on feminism, intersectionality, genre studies, and age studies, among other approaches, by authors from Ireland, the UK, Hungary, the USA, Nigeria, Canada, and Taiwan.

Lisa Fitzpatrick is Senior Lecturer in Drama at University of Ulster in Derry, where she teaches critical theory and Irish theatre and performance. Her research focuses on women’s writing for the Irish theatre, and the representation of gender-based violence on stage. She is the editor of four other collections of essays: Performing Feminisms in Contemporary Ireland; Performing Violence in Contemporary Ireland (both with Carysfort Press); Le théâtre irlandais: au carrefour des traditions (special double issue of L’annuaire théâtral, co-edited with Joel Beddows) and Wole Soyinka and Contemporary Theatre (special issue of Modern Drama, co-edited with Anthony Adah). Her monograph Rape on the Contemporary Stage was published by Palgrave in 2018, and her current work explores post-conflict theatre and performance in Northern Ireland.

Mária Kurdi is professor emerita in the Institute of English Studies at the University of Pécs, Hungary. Her research focuses on modern Irish literature, English-speaking theatre and comparative studies. She has published seven books and edited or co-edited several essay collections. These include Representations of Gender and Female Subjectivity in Contemporary Irish Drama by Women (Lewiston, Edwin Mellen, 2010) and Radical Contemporary Theatre Practices by Women in Ireland co-edited with Miriam Haughton (Dublin, Carysfort Press, 2015). Mária Kurdi has published numerous articles in Hungarian and international journals as well as in essay collections. In 2020 she edited a block of essays about aging and ageism in literature and theatre for the Hungarian Journal of English and American Studies, which will be the core part of a book on the subject she is editing for HJEAS Books, New Series, to be published in 2022.