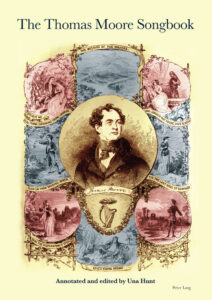 The Irish songwriter, Thomas Moore (1779-1852) enjoyed enormous popularity during and after his lifetime, and his celebrity was summed up by his friend, Lord Byron, who declared him: «The poet of all circles and the idol of his own». Yet, despite his seminal role in the development of Irish national song, few modern editions have been made available and none focus on the earliest piano arrangements published during Moore’s lifetime and the decades following his death. This new critical edition collects together for the first time in one volume selected original arrangements of the world-famous Irish Melodies for solo voice and duet along with other successful English-language songs to texts by Moore and foreign-language settings by Schumann, Mendelssohn, Berlioz, and Duparc. Several aspects were considered in choosing songs such as their historical significance as well as their usefulness to the performer and impact in performance and the beauty of the vocal content and the partnering accompaniments. The Thomas Moore Songbook will appeal to a broad spectrum of academics, practitioners, and teachers of singing as well as those with a deep interest in Irish history, culture, and heritage.