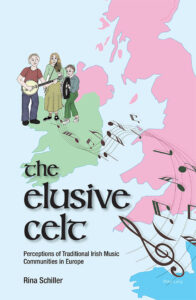 The popularity of Irish Traditional Music in Europe is in itself an interesting phenomenon, particularly as it crosses the divide between East and West. Schiller’s book thereby offers an unusual and possibly unique perspective on its subject.
– Martin Stokes, King Edward Professor of Music,
King’s College London

The Elusive Celt departs from previous work in the wider ethnomusicological field about traditional Irish music within its home contexts and the English-speaking main destination countries of Irish emigration, by adding a central and eastern European perspective on perceptions of Irish musical culture and images of ‘the Celtic.’ Specific attention is given to influences of recent European history on these perceptions. Detailed ethnographies of community music-making contexts in six different countries from the Baltic to the Bosphorus, along both sides of the former Iron Curtain, introduce the reader to cultural intimacies of local community musicians with a long-term dedication to playing traditional Irish music. The emerging images differ widely from common stereotypes. The reader gains an insight into processes of how musical and extra-musical detail is communicated between local native Irish and non-Irish musicians at these locations, for which Rina was able to draw on her knowledge of different European languages.

Rina Schiller is an ethnomusicologist from a multicultural background, with roots in Ireland and in continental Europe. She lives in Belfast, where she has played and studied music for many years. She plays traditional Irish music on mandolin, whistle, concertina, and bodhrán, and Turkish folk music on the baglama (saz). Rina regularly participates in local Irish session playing, and for her Turkish repertoire, she has been adopted as honorary representative musician by the Turkish Association of Northern Ireland.