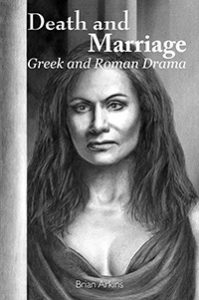 Death and Marriage: Greek and Roman Drama
By Brian Arkins

First published in Ireland in 2018 as a paperback original by

This book aims to provide a comprehensive, but succinct analysis of the tragedies and comedies written by Greek and Roman dramatists. The book is comprehensive in the ways it deals not just with Greek tragedy of the fifth century BCE, but also with Seneca’s tragedies of the first century CE.

The book also deals with two types of Greek comedy: the comedy of ideas in Aristophanes (fifth century), and the later social comedy of Menander, this being appropriated in Rome by the comic dramatists Plautus and Terence. The tragedies and comedies of fifth century Athens do not endorse the official ideology of the city. They raise questions about the position of women, the never-ending war with Sparta, the nature of religious belief. Crucial here is the depiction by Euripides and by Sophocles of powerful women characters, female intruders who disrupt the male world: Medea, Antigone, Electra, Lysistrata. Comic drama usually concludes on a positive note: with marriage, with plenty of food and drink.

The Author
Brian Arkins is Professor Emeritus of Classics at the National University of Ireland, Galway. He was educated at Clongowes Wood College, and at University College, Dublin. He is the author of 12 books of criticism, including 3 on Latin poetry and 2 on Yeats. Dr Arkins has written 2 books on drama: Irish Appropriation of Greek Tragedy, and What Shakespeare Stole from Rome. He is one of the Directors of the Irish Institute of Hellenic Studies in Athens.