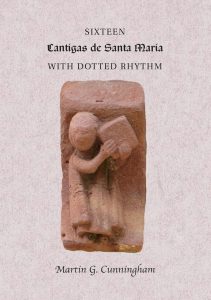 The Cantigas de Santa Maria, a collection of over 400 songs praising the Virgin Mary and narrating her miracles, constitutes one of the most important collections of vernacular songs (‘vernacular’ in this case being Galician) to survive with their music from before 1300. The collection was assembled at the direction of Alfonso X ‘The Learnèd’, king (1252–84) of Castile and León, who may also have composed some of the texts and even melodies.

The musical notation in the three surviving musically-notated manuscripts conveys the melodies without diffuculty to a modern reader. However, some aspects of rhythmic inter-pretation (i.e., the relative duration of the notational symbols, of which there are over 150) are still a matter for debate.

A further important aspect is that the earliest form in which the corpus was put to-gether — that known as the ‘Toledo codex’, which contains about a third of the eventual repertoire — is encoded in a different (arguably earlier) form of musical notation. Almost all the pieces included for study in this volume survive in two different notational systems, to the advantage of the process of decipherment.

A particular difficulty inherent in the notation — at least in the early phase of compilation of the corpus — is the absence of any symbol specifically representing a note worth half a beat in length. This means that the writing of what in modern terms would be called ‘dotted’ rhythm in ternary metre ( ±. Ä ± ) is not straightforward; an orthodox approach might conclude that such rhythms cannot be present since they could not be written down. In the context of cantiga scholarship the question of dotted rhythm has not been entirely dismissed, but nor has it been fully explored: the best estimate currently available puts the number of pieces in the first 100 displaying dotted rhythm at a mere three.

Scope of the Book

This investigation takes as its corpus the first layer of notated cantigas, essentially those that survive in ‘Toledo notation’, although the notation of all sources is considered. This allows the differing notational codes to be compared, and valuable information to be extracted. What emerges from detailed analysis is a group of sixteen pieces all making use of the same specific notational procedure for notating dotted rhythms in the absence of a half-beat symbol.

Of the sixteen cantigas, eleven occur in the first 100 pieces, thus nearly quadrupling any previous estimate of the presence of pieces with dotted rhythm.

In the discussion accompanying each piece analysed, particular emphasis is laid on the correspondence of musical and textual stress, as well as on features such as regularity of musical phrase-lengths.

The edited cantigas are embedded in the discussion and analysis, but are laid out as self-standing performing editions of the pieces concerned. An Appendix provides full editions of the original Galician texts — a feature not generally encountered in musical editions of the Cantigas — and full English translations. There are brief notes on syllable-division and word-stress for the help of performers.

The book will be of interest to two distinct audiences: (a) scholars and others interested in early musical notation; and (b) performers of medieval song.